Posted by ME Luka on Jun 15, 2013 in art, funding, media, miscellaneous, scholarly, travel

Invited Guest: Congress of the Humanities and Social Sciences | June 2013 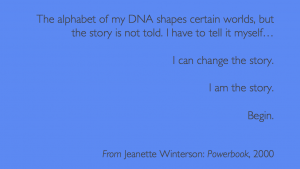 Early in 2013, I was invited by the President of the Social Sciences and Humanities Research Council, Dr. Chad Gaffield, to participate on a rather impressive-sounding cross-disciplinary SSHRC panel – Enhancing digital scholarship: Technologies, content and literacies. After a couple of preparatory phone meetings, we all met as a group in person for the first time on June 4. It was a gorgeous, sunny day on the bucolic University of Victoria campus.

Dr. Gaffield provided opening remarks, and asked a few pertinent questions to introduce the session. The panel included leaders in the field: Drs. Geoffrey Rockwell, David Schloen and Ray Siemens, as well as myself, and was moderated by Ted Hewitt, Executive Vice-President, Social Sciences and Humanities Research Council. The 2-hour session was marked by complex ideas explained in markedly different ways – from digital media production and dissemination to the DNA of language through to the history of coding internationally. A lively series of discussions and questions concerning the digital humanities and social sciences ensued. Below are some excerpts from my presentation.

In 2003, while working at CBC Television as a producer-director and executive producer, I was approached by sociologist Jan Marontate and ethnomusicologist Bev Diamond to collaborate with them on a sound-based project to be funded by a modest research grant from SSHRC[1]. The idea was to pilot an outreach strategy for music and sound artists through public broadcasting that would articulate research findings around music heritage and its relationship to digital technologies, to broader audiences. Marontate and Diamond expressed interest not just in having CBC broadcast what might get produced – an instrumental relationship – but also in building on the specific values and approaches used at CBC ArtSpots. ArtSpots was a decade-long television and internet collaboration between CBC and artists, curators and other partners, for which I was the founder and executive producer. ArtSpots was also a rare entry point within broadcasting featuring a closely networked relationship with the culture sector, predicated on the mandate articulated in the Broadcast Act.  It took two attempts to persuasively communicate this Sound Stories project to the SSHRC assessment process and to the key decision-makers at CBC. Funding was secured in 2005, and the project completed by 2007. My role in the SSHRC project on behalf of CBC was advisor to Sound Stories on CBC’s production and licensing system and facilitator with the relevant cultural communities. Through that experience, in part, my interest in what was going on in the academy was rekindled. Eventually I ended up here, as a Vanier Canada Graduate Scholar, considering the work that happens at the intersection of the arts, broadcasting and digital media.  More specifically, for my doctoral research at Concordia, I’m looking at ArtSpots itself. Digital scholarship is a significant part of that process. So are the dialogues engaged along the way.

The ArtSpots trajectory of activity: 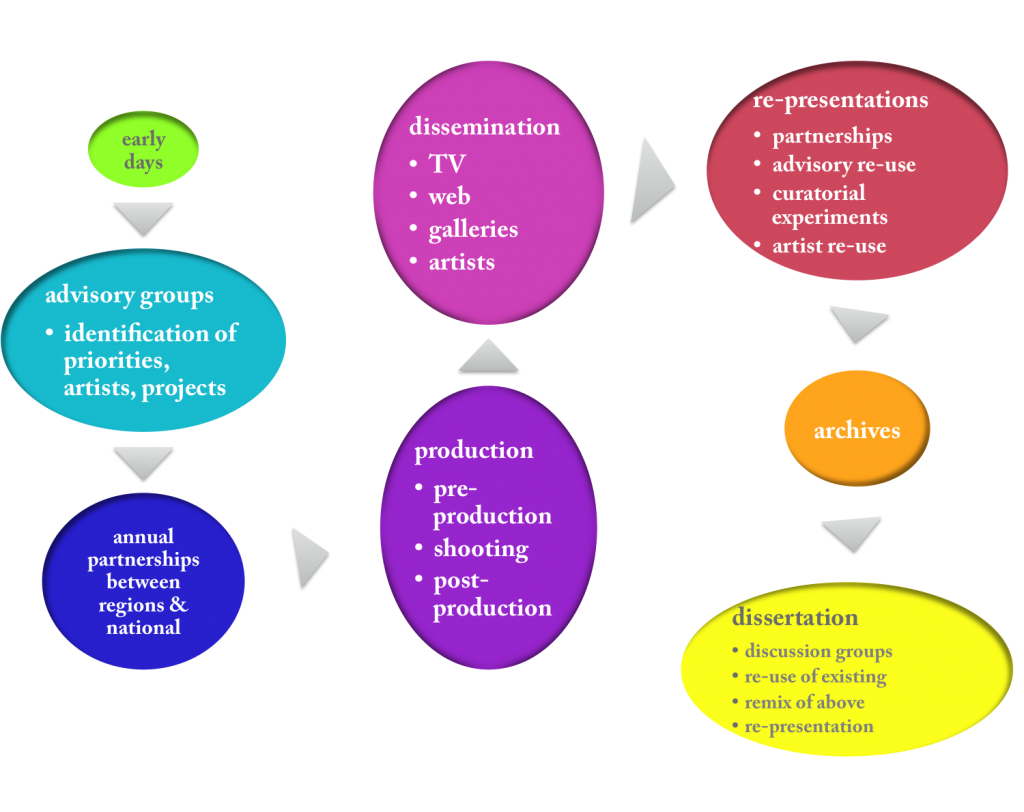 It would be nice to say the same for CBC or for the media industry in general. Despite openness to occasional collaborations for digital innovation, there is a relative dearth of connections among members of the media industry, and between the industry and the academy. Some of this is due to the modes of doing business, including how differently labour and technology are organized in each sphere. In the two decades or so that I’ve worked in and studied the media industry and the culture sector, I’ve also observed that the sector is kind of messy. Negotiations require power-sharing and collaboration in an environment where the individual voice is expected to assert itself, and financing is vital. More fundamentally, there is a fairly consistent disconnect around articulating common values between academic domains and the media industry. Interestingly, digital scholarship may yet prove to be the field where common ground can be found. 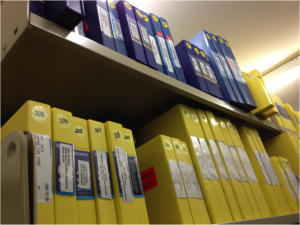 For example, the unique professional and creative practices at ArtSpots were generated by the exercise of individual agency through creative work in the context of particular systemic conditions. At its most optimistic, ArtSpots was an attempt to activate a flexible space for artists to create and present work in the soon-to-be digital media system of the 2000s. At its most challenging, it was a hard-scrabble negotiation of limited resources in Canadian public broadcasting. The ArtSpots concept matured through evolving dialogues among curators, artists, creative producers and broadcasters. Its operationalization of modes, flows and networks points towards the potential represented by digital scholarship, in relation to globalized capitalism. Critiques of globalized capitalism (e.g. Lee & LiPuma, 2002) include a reconsideration of the separation between economy and culture, and the potential impact on citizenship and nation-state. Broad media industry concerns can be linked to a growing body of locative media and mobility studies scholarly work analysing cultural space and activity, including how alternative funding models affect cultural media production (Luka, 2012). Money isn’t everything; it isn’t even the first thing. But it’s telling. 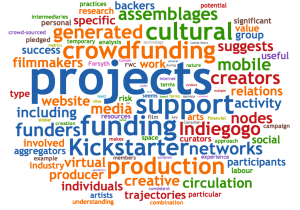 Consider the case of crowdfunding, [as I do in this article]. In the last three years, crowdfunding has exploded, financing thousands of cultural projects and activities through small donations aggregated or leveraged with bigger investments. It’s evident that success for modest-sized projects is predicated on the fairly extensive personal and professional networks willing to support such a project. This is quite similar to non-profit fund development practices. A critical mass of individuals, projects, and the amount of capital moving around generates knowledge. This network of nodes of activity imagines and circulates art and media financing to its own key audiences. More optimistically, as well as creative production and connectivity, it links to urban flows and the opportunity for public (sphere) interventions (Sassen, 2006). In crowdfunding, participants are bound together in the creation of new social imaginaries weaving into centuries of nation building.

In March of this year, Graham Carr, outgoing president of the Federation for the Humanities & Social Sciences, commented on the potential of digital scholarship at the Federation’s AGM. To quote him:

“A week doesn’t go by without a call to reform the PhD in arts and humanities, to promote more trans-disciplinary fertilization, professional skills development in areas like project management, greater experiential breadth and global mobility, or [work] in humanities‐friendly industries… There are hugely creative opportunities to make a critical turn here. …[S]ome members of our community are skeptical about the emerging (industry and public sector) partnership grant opportunities through SSHRC… Grants like these open new and sometimes unexpected opportunities. … They create conditions of convergence…” 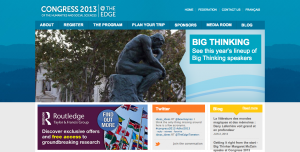 If digital scholarship grants – and universities, faculty, staff and students – are working well together, they are also connecting meaningfully to the world-at-large. The collaborations and project-based work of the digital humanities signal effective modes of listening and working in many arenas. These dialogic relationships challenge our start-up, corporate, public and third sectors to engage in authentic, innovative research – big and small – on an ongoing basis – together with the academic community. Not for-profit, but for everyone.[2] Among corporate and civic participant-investors alike, this means to take advantage of the brightest minds, and to take the most inclusive productive ideas to heart. Let’s not hesitate to listen hard, and to have that ongoing dialogue. Which leaves me with a question: What can you do with your commitment to digital scholarship?

[1] under the Initiative on the New Economy program

[2] As Carr asks, where are the PhD students going? Well, it seems that it’s straight back to where we came from – to industry, the academy, to the public, to culture and to the nonprofit sector. To push society towards the realization of complex and inspiring visions of collaborations and civic engagement. This responsibility is embedded in everything we do as academics in the social sciences and humanities, and as participants in everyday life.