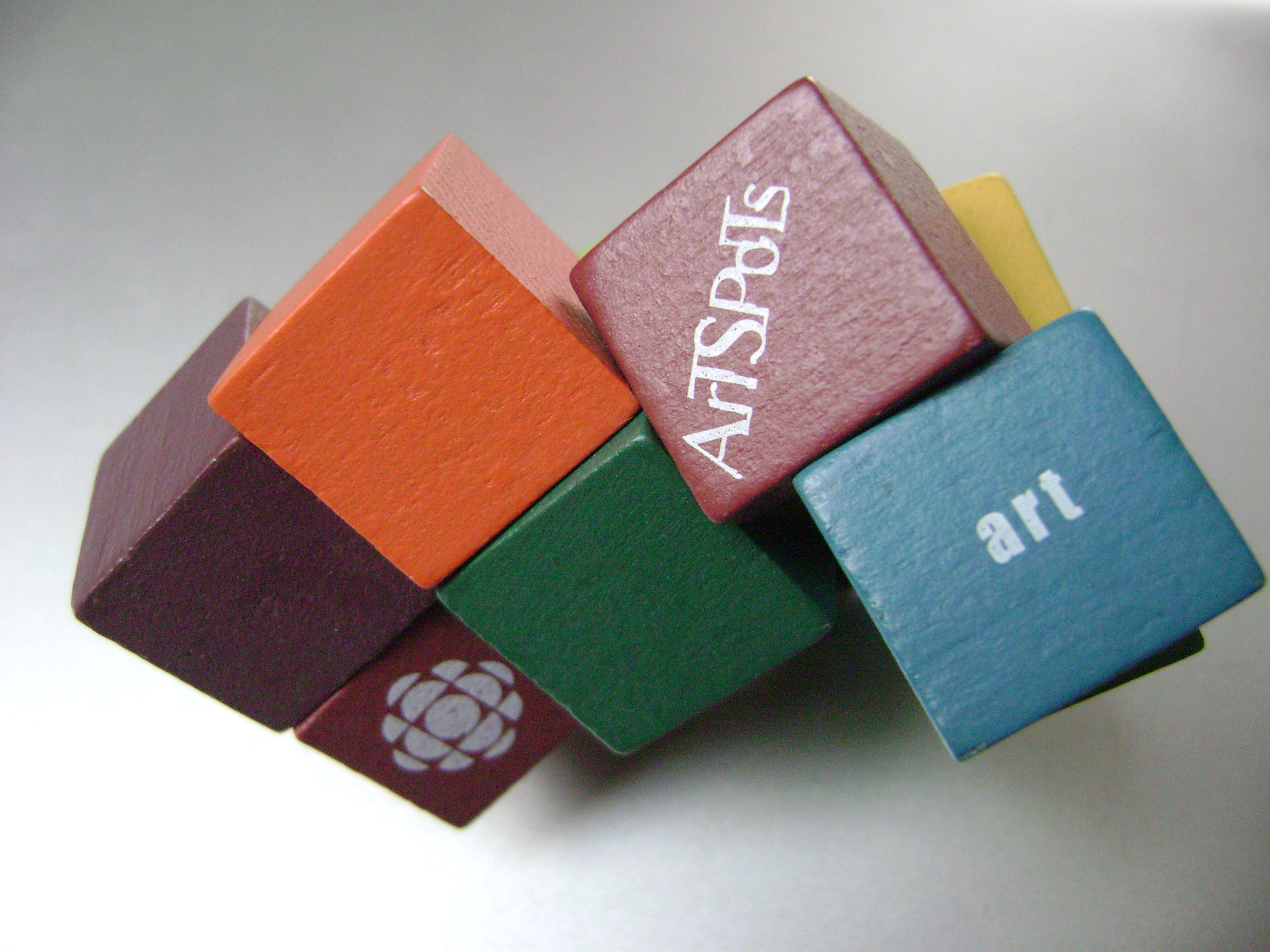 January 1, 2012: Between 1995 and 1997, I had a number of short-term, freelance or independent work experiences with CBC Television in Halifax. Many of these related to gaining on-the-ground technical and creative experience in television production. Working in production as an assistant, as a co-ordinator and then as a production manager, I did set dressing, talent wrangling (mostly musicians), contracts, schedules and budgets.

However, it was another early project from that time that helped create the conditions for what would become ArtSpots. When I moved from Toronto to Halifax in 1994, I intended to leave non-profit management, communications and fund development consulting behind. I’d been doing it for a decade, and had determined to become an artist by attending NSCAD (Nova Scotia College of Art and Design). Turned out there was some interim, transitional work I needed to do first. So, in 1994, I developed a portfolio in order to gain entry to NSCAD, while working as a consultant on non-profit projects with John Mabley and Associates. By late 1995, I had entered NSCAD.

In addition, I worked seasonally for the Atlantic Film Festival, in events, sponsorship and volunteer management, and independently on a few non-traditional consulting projects.

The most critical of these projects was working as a consultant to CBC Television’s Maritimes Region to assess the potential for partnerships. I reported to Fred Mattocks, then Regional Director of Television. This project ran from late 1995 through early 1996, and included a comprehensive interview-based survey. Interviews were conducted with influential individuals at foundations, broadcasters, production companies, philanthropic corporations and other public institutions, i.e. a combination of individuals normally involved in philanthropy or media production but not both.

The results of the partnership survey suggested that the CBC regions could be a crossroads for private and public project-based partnerships between CBC, philanthropy and media production.

Initially, this informed the funding model for television programs such as Street Cents, and eventually became the basis for an entire department housed within the Communications operation of the company, mostly under the leadership of Jennifer Gillivan. It began with community outreach, and developed into mutually beneficial, multi-platform media projects, usually including a broadcast component, and other value-based, mandate-centred activities. Today, it incorporates regional communications functions and brand management too. For my part, having conducted the survey and recommended some preliminary processes and possibilities to CBC’s regional leaders in 1996, I carried on down my own creative path at NSCAD in interdisciplinary arts, including installation, sculpture and video art.

Happily, I kept in touch with my contacts at CBC while at NSCAD. Another fruitful experience emerged during the fall of 1997: my participation as an artist-in-residence at the CBC Halifax plant. On September 9, I reported to Media Arts Professor Wilma Needham (my NSCAD supervisor & liaison) and to Regional Director of Television for the Maritimes, Fred Mattocks (my CBC supervisor & liaison). For the three months that followed, I participated in, queried and observed various aspects of television production and broadcast. In particular, I explored whether it would be possible to develop a pilot project on direct presentations of art for broadcast. My notebooks from that period show the range of people I spoke with, and the avenues we explored.

By October of 1997, I had proposed the concept of—and the name for—ArtSpots. I was actively engaged in conversations with Russell Kelley, a music officer at the Canada Council for the Arts who had formerly been the Executive Director of the relatively short-lived Nova Scotia Arts Council. Russ’s insights into the Council’s structures, priorities and goals were crucial to articulating the alignment of the future ArtSpots with general art awareness and audience development goals which were just beginning to coalesce at the Council. He noted how complementary ArtSpots might be to the nascent Artist-in-the-Community program at Council, which was under the direction of Joanne Morrow, then Head of the Arts Division, and to the broad vision of arts officers such as Anne Valois. Russ also put me in touch with John Goldsmith, then Director of Communications for the Council. John’s enthusiasm for audience development later developed into a sophisticated partnerships strategy and stakeholder relations portfolio at the Council. Both Russ’ and John’s ongoing curiosity about the various permutations and activities of ArtSpots continued throughout its decade of production, including its progression into an archive. They both were instrumental in providing advice about professional jurying processes as well as suggesting contacts at arts organizations across the country with whom to consult about the ArtSpots concept.

Back at CBC in mid-October 1997, I was also working on a production schedule and creative parameters for my first formal television documentary. This was a paying gig that had initially been set in motion through my artist residency, but quickly evolved into a temporary, part-time job as a producer/director-in-training. During my residency, I had many conversations with artists, television producers and technical crew members, including several artists I knew who had worked for years in the relatively transient, yet robust arts community located at Pier 21. Pier 21 was one of several former working sheds on the Halifax waterfront that was up for redevelopment. This meant the artists were being strongly encouraged to move out. My drive to document what seemed to me to be heavy-handed treatment of some very creative individuals became The Invisible Visual World at Pier 21. Shot in January and February 1998 and edited in May, the half-hour program explored how these creative individuals operated as a community. It screened at the Atlantic Film Festival that fall, aired regionally on CBC, and won an Honorable Mention Award at the Columbus (Ohio) International Film and Video Festival.

A couple of years later, Pier 21 became the site for the Canadian Museum of Immigration. This later development would come to play a role in my own evolution as a producer/director and in the CBC’s partnership programming. But that’s a story for another day.

By the time my residency was done in early December of 1997, I had:

In all, I was making observations, asking questions and generally probing how work got done, where satisfaction from creative work originated, and what kinds of creative potential existed in television.

As early as September 25, I began having several conversations with the newly-hired website manager, Carolyn Smith. Her work focused on “community building on-line,” and the development of CBC-hosted web pages and web sites as discussion spaces such as political panels from the news programs; gardening, sports and weather columns; and fan sites for programs such as Street Cents. Two years later, Carolyn left CBC to work at PBS in Washington and set up their integrated web programming strategy. ArtSpots had just officially become a national television and internet media project. In a curious quirk of fate, I ended up buying the house she co-owned in north-end Halifax in 2000. It’s been my home base ever since.

Incidentally, the house happens to be located in the heart of what was Richmond, the hillside rising up from the Halifax harbour that was wiped out during the Halifax Explosion in 1917. But that is a story for another day, though I will say that it includes other arts-based documentary and web content, thanks to the CBC’s Halifax Explosion partnership project. My involvement in that project included exploring the Hugh MacLennan and Arthur Lismer connections, and other galleries from the website, and working with Shauntay Grant, Brian Downey, and the artwork of Garry Neill Kennedy, and Alan Syliboy.

Simultaneously with my CBC discussions and my external conversations with Canada Council in the fall of 1997, I spent the term speaking to people in the Nova Scotian cultural community outside the usual CBC ambit. We spoke of how artists’ work operated on television and whether there was the potential for producing and presenting artistic work with creative integrity on television and the world wide web at CBC. These discussions were with artists such as Jan Peacock, Peter Dykhuis, Wilma Needham, and Monica Tap. I also spoke with curators and gallery directors such as Mern O’Brien, then Dalhousie University Art Gallery Director; Gordon Laurin, St Mary’s University Art Gallery; Pam Pike Technical University of Nova Scotia; Mary Ellen Herbert, National Gallery of Canada; and Bernie Riordan, then at the Art Gallery of Nova Scotia. In addition, Russ Kelley, Fred Mattocks and other leaders were already involved. We came to the conclusion that an approach embodying artistic integrity in this initiative was more than just possible: it was crucial. And it would be great.

Out of these discussions also came a practical, hybrid selection process that would quickly evolve into expert volunteer Advisory Groups, using clearly articulated objectives, value statements and criteria. This process was based on the producer-led decision-making approach in television combined with the way in which arms-length jurying was managed at the Canada Council for the Arts and provincial arts councils. As Monica Tap put it at the time (I paraphrase): this was not about creating a petting zoo for general audiences to observe those unusual creatures called artists. Instead, we all agreed, it was about the vitality of artwork and the presence of art in popular culture, including the empowerment and agency of artists in production processes.

By December 1997, then, ArtSpots was underway.