Reflections on research to date:

In 1997, the original television and internet-based program called CBC Artspots was conceived during an artist residency I did in Halifax, on Canada’s east coast. 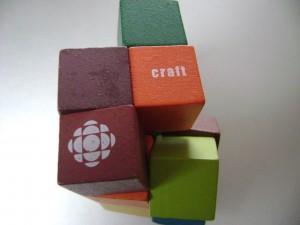 That program started as a regional pilot project, and would go on to be renewed for over a decade, becoming one of the longest-lasting national public broadcasting arts programming initiatives in Canada in the process.

Much of the programming produced was featured and continuously available for streaming for 12 years, on CBC’s website. It provided visual content for exhibitions in galleries, museums and in community partnerships, as well as on several different television programs on the Canadian Broadcasting Corporation’s (CBC’s) television channels, including then-named Country Canada, the Doc Channel, main Network, regional news and PSA timeslots (CBC Artspots Archives, Luka interview, Luka archives). 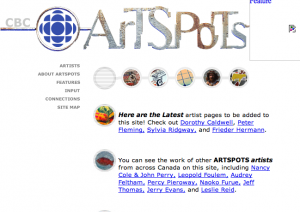 Ceasing production in 2008, the last active phase of production took this collection of multi-platform, public broadcast productions on the fine arts—the largest to date in Canada—and prepared it as a stand-alone archive now housed at CBC Halifax. Copies of most of the materials produced were provided to the cultural creators involved. Many have not yet taken advantage of their right to use those materials for educational and promotional use, including displaying them on their own websites.

Logo found on the designer’s website. The actual website is only findable on the Internet Wayback Machine archive.

The majority of the video-based materials produced—the very reason for its existence and its greatest strength—are no longer accessible on the CBC website or on television to the general public (though the 30-second items pop up from time to time on television). This pointed absence of born-digital and early multi-platform content is even more pronounced within the context of a broader absence: the dearth of web-based residue of several government-funded initiatives promulgated as Canadian cultural digitization of the 2000s, including the National Library and Archives, the Virtual Museum of Canada, Culture.ca, etc. 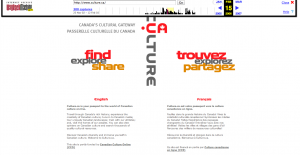 In effect, Canada’s first decade of substantive visual digital existence has been wiped out by broken links, insufficient resources for maintenance and the establishment of newer budget priorities.

Even the Internet Wayback Machine has no trace of the websites run by National Library and Archives Canada prior to 2007, and the period 2008-2011 is pretty patchy.

Through my research to date, I begin to rethink media-based histories and counterhistories concerning this ten-year display of visual culture on television and the internet. It is relatively straightforward to suggest that ArtSpots was a premiere example of convergence culture in the way that Henry Jenkins, Douglas Rushkoff, or Don Tapscott analysed through the 2000s. Certainly, it has been discussed this way in relation to media production and distribution (Luka), of and for its time. In order to understand how and why this may or may not have been so, it is important to find a way to challenge the potentially totalizing narrative of Artspots as “simply” an example of convergence culture during the early 2000s in North American public broadcasting and more closely examine its other contributions and indicators about cultural media production.

The beta-test output prepared for presentation at the International Communications Association conference in Phoenix, AZ in May 2012 is comprised of 24 “rough-cut” videos combined into one K-film (Korsakow-film), using five keywords to organize the material. Based on this test, I can see that 200 or more short videos will give me the robustness that I will need to explore the case study fully. 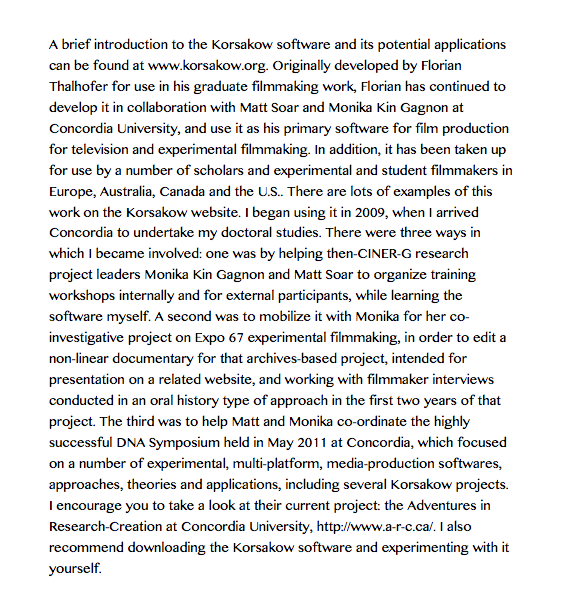 It is possible that all of these materials could go into one large Korsakow project (as I originally envisaged), which would have the potential to contain and serve up about 600-700 minutes of footage. However, past experiences with Korsakow and the experience of putting together the test Korsakow indicated something quite important that I can apply to the next stages of the research program. Rather than attempt to make one large project, I can more accurately reflect the iterative nature of the research program by developing and producing a series of smaller Korsakow-projects, each of which relates to the project as a whole but does not stand-in for it. 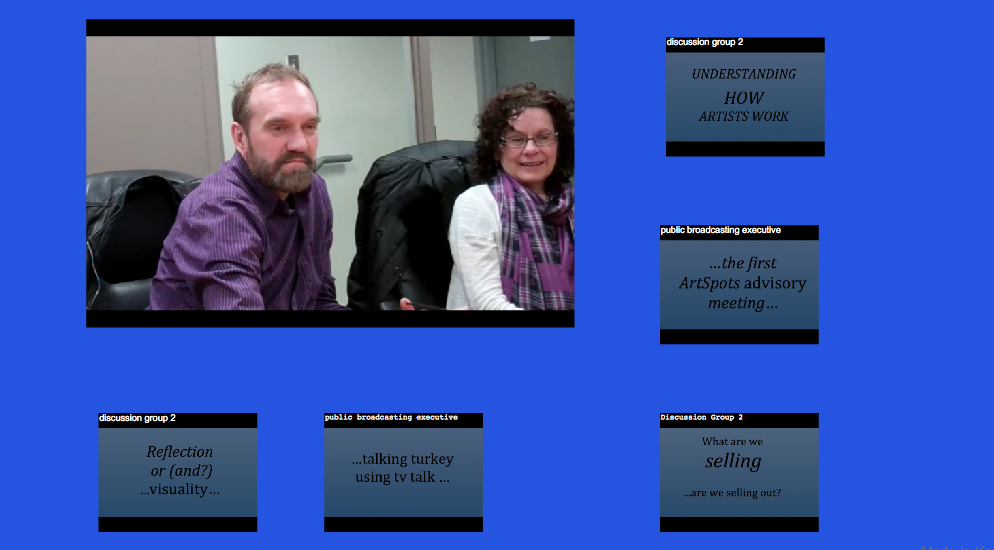 Screen capture of beta-test Korsakow film regarding CBC ArtSpots, May 2012.

This will also support having people actually flow through and consider the content. Given attention spans on the internet, the large volume of content required for 200 short videos in a lone non-linear project would make a fulsome experience of the project almost unachievable by visitors. No matter how carefully considered and evolved the organizational themes and keywords become, it is a great deal of material. In addition, without organizational signposts, it will be extremely difficult for me to manoeuvre through the material myself. This helps indicate the importance of my current focus on logging the video-based material while simultaneously editing short videos from them. Themes and keywords will initiate “coding” for both analysis, and for editing and presentation purposes, including providing a pathway for further editing. Even more practically, creating collections of short videos that will comprise a series of stand-alone K-film will allow for each relatively small body of content (or theme, or group of individuals or material nature of the content) to be considered at a time. Then, as each collection of content is assembled, each can also be scrutinized in relation to the others. The corollary in television production would be similar to the process of making a series of short programs rather than a tv movie of several hours’ duration. To stretch the analogy even further, and indicate the level of independence that each “episode” could achieve, I am building an anthology series, not a television program serial. This is entirely consistent with the type of programming generated in today’s digital media environment. I am curious to see whether and how this can help reflect, scrutinize and analyse CBC ArtSpots as a deeply informative digital and broadcast media project located in a transformative period. 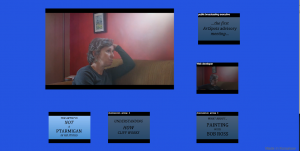 Using Final Cut Pro for video editing and Korsakow for presentation purposes allows me to shuffle content systematically even while employing a meaningful level of randomness in order to generate new configurations, possibilities, and observations. Parsing the interviews themselves through editing is already yielding interesting observations. Affect plays a part in the selection of the video clips for editing–this is reflected in some of the most appealing and revealing interview clips. To anchor each of the short videos, I tend to choose video clips where the interviewees are leaning forward or gesturing, laughing, or speaking more excitedly. The clips “tell” me when something of significance is being introduced. Furthermore, if there are several other clips that relate to such a clip, and they all have this kind of energy, that tells me something about how engaged the participants are with the questions. Conversely, the edited ArtSpots materials tend to be more contemplative in nature, particularly the items presenting artwork. Though I have only just begun to incorporate these materials into the short videos, I can already see how they are providing a compelling visual counterpoint to the intellectual and emotional tone present in the interviews. It will be interesting to see if and how visibly moving the ArtSpots programming can be in combination with quiet contemplation or energized intentness in the new interviews.

A few more details about the work so far:

Twelve interviews have been conducted by me to date with artists, advisory group members, producer/directors, resource managers and project partners. Some of these interviews are more conversational in nature than others, eliciting a dialogue about the project, or even co-interviewing. Another three or four will be conducted with ArtSpots participants or additional snowball interviews with leaders or facilitators involved with other projects (perhaps TED talks or Tamarack Foundation). Three specific interviews of me have been conducted: one in writing, one on video, and one in an audio format intended for another project. Three discussion groups have been held, with 15 participants (four to six in each) not counting me. These have included ArtSpots artists, ArtSpots Advisory Group members, and senior intermedia arts students who knew nothing of ArtSpots before my visit with them. This represents a substantial probe into the nature and processes at CBC ArtSpots, including residual impact and memory. As mentioned above, several themes and common concerns are already emerging, providing me with a basis for further analysis and comparison (e.g. through the keywords of the first K-film test), using the media technology as well as transcription and coding. 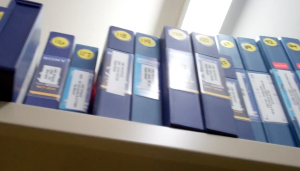 In the spring of 2012, three visits were made to the formal Artspots archives at CBC. This included surveys of the boxes of documentation and original field tapes, as well as master sets of edited materials and climate-controlled dubs of the master set and the field tape collection. It also included a review of the website content, saved in its template-based form of more than 2000 pages of content, corollary images, text, and video. Finally, it included a scan of the SQL file for the putative database version of the new and completely revised ArtSpots project that was about to be launched in 2008, as an aggregative, curatorially-based initiative with the potential to include user-generated content and a much deeper degree of interactive capability, before program funding ceased in that year. The visits to the formal CBC archive will continue in late summer through the fall. The Samuel and Saidye Bronfman Family Foundation files relating to the ArtSpots project have also been provided to me to assist with the analysis of the project. Finally, over the last couple of years, I have consulted my own considerable archives, and will continue to do so as part of the research and writing/editing phases.

To date, five interviews and one discussion group have been transcribed. These and the rest are being logged in Final Cut Pro and edited into short videos. This will continue through the fall and winter, with continuous periodic exporting of the short videos for use in Korsakow. A very modest amount of the CBC-produced ArtSpots content has been redigitized and imported into Final Cut Pro for use in the video field notes; this will also continue through the fall and winter. Editing has been preliminary and exploratory so far, with a focus on five themes which correspond to the keywords I am using in Korskow for now: technology, creativity, reflexivity, spaces and audience. These are likely to change, which is quite easy to do in Korsakow – a flexibility that is one of its most significant attractions. It is important to note that the use of the term “keywords” in Korsakow means something quite different than it does for search engine optimization for websites etc. It refers primarily to the pathways that open up, rather than a way to aggregate or collect (or search) for content.

For my purposes, the keywords I am currently using in the Korsakow process relate to themes emerging from the interviews and from the probes into the archives. They also provide a productive pathway through all the media-related material, and therefore back to my theoretical framing and original questions. Perhaps most significantly, one of the main questions I ask these days signals a slight, but significant shift. Rather than interrogate the role of the artist, I ask: “What is the work of the artist in relation to broadcasting and digital media?”